One of the perks of working for Resource Media is getting to work with a bunch of different partners on diverse projects. Often, different projects match up in interesting ways, and sometimes, two come together to create something really powerful.

That happened recently with our work on the Power Past Coal campaign. We’ve been working with the coalition on their social media platforms, and decided to take some of our learning from Resource Media’s Visual Story Lab and apply it to the campaign’s efforts on Facebook.

We know that Facebook is a super-visual platform—photo posts are seen by more fans, and typically generate more likes, comments and shares than those that include links.  Combining the viral potential of compelling imagery with hard-hitting messaging is a tried and true recipe for getting more people involved (350.org does a great job of this). 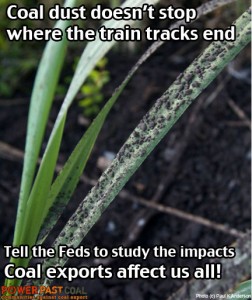 To get the biggest bang for the buck, we employed the magic of text-over-photo memes so that the words and photos would reinforce one another. Known as dual coding theory in the cognitive science world, it’s basically the idea that our brains hang on to information that has both visual and verbal indicators a lot longer than when we just read words or look at pictures. We discuss this idea at some length in Seeing is Believing, Resource Media’s best practices guide on visual storytelling (and if you’re interested in online communications or digital media, you really must check it out).

So, did dual coding theory help Power Past Coal?  Yes! We were able to double the overall reach of the page, month-over-month, nearly double the number of people “talking about” the campaign on Facebook, and we added a bunch of new fans.

We’re not suggesting meme-style photos are a magic bullet; it’s still important to follow social media best practices, tell good stories, and work to maintain your community. But, the combination of powerful pictures and a handful of carefully chosen words can help your organization capture attention in supporters’ newsfeeds, equip them to help carry your message, and drive home important points.