In yesterday’s post, we shared some of the secrets of success for the Montana Wilderness Association’s successful NexGen Wilderness Leaders program.

But what about social media??!!

At some point in my conversation with Zach Porter, who directs MWA’s NexGen program, it struck me that we’d been talking about NexGen organizing for the better part of an hour and social media had not come up once. I said as much, and Porter laughed:

I love that you brought that up. You have to get off of the computer and go find young people where they are. Social media is a key organizing tool, no doubt, and we use it all of the time, but it plays a small role relatively speaking in terms of how we are engaging people in all of this work.

Each of the student groups manages its own Facebook page, and they use them to share stories and pictures from outings or information about upcoming events and actions. But, as Porter noted, relationships aren’t built online; they are built in-person. And it’s the strong relationships that make the programs successful:

It’s the face-to-face interactions and opportunities to get involved in backcountry settings where the strongest bonds are made, and that drive people to get back in touch and seek us out when they have an interest in volunteering.

So, the good news is you don’t have to be a digital whiz to get young people in your cause. You just have to place a premium on fun and relationship building—as described in our previous post—to get them involved. 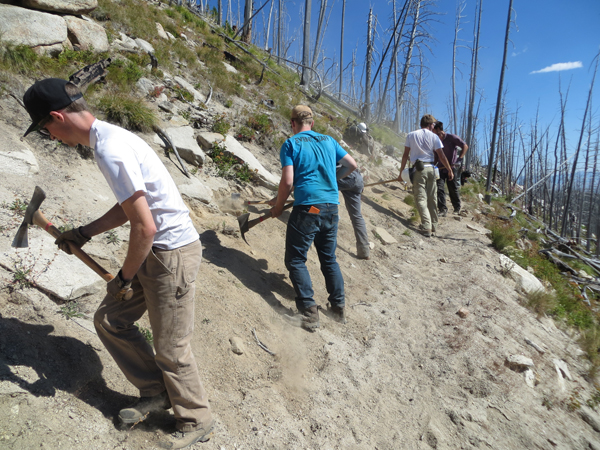 Porter’s ultimate goal is to work himself out of a program and make NexGen organizing simply part of the organization’s DNA. And both he and the overall leadership at MWA see the program as part of an effort to build an MWA for the 21st Century:

The whole idea is we’re building an MWA for the 21st century, looking to the next 50 years as a whole organization. The lesson we’re learning is that there is such incredible potential here, and there are so many young people who aren’t getting the opportunity to build lasting relationships with wild country and with leaders and mentors in the conservation community. Kids recreate in different ways than they did 50 years ago; they are more indoors. Beginning with those first hikes in the woods, first canoe trips, moving on up through first phone calls to your Senator or first LTE, if we aren’t thinking about the ways we can bring these people in early on, then we’ll have a much harder job when we try to reach out to them when they are 40 or 50.

So there you have it. As nonprofits around the country scramble to diversify their membership, the Montana Wilderness Association’s NexGen program demonstrates that success can built on good old-fashioned organizing mixed with equal measures of fun and community building.

Please tell us about your experiences recruiting young people to your cause in the comments below!

Top photo: Getting down to business – when the weather cooperates, University of Montana students meet in the backyard of the W.I.L.D. Haus. Credit: MWA