When I moved to Seattle in 2008, the first thing I tried to do was make some like-minded friends. A new city can feel pretty isolating without human connections. Growing up in Canada meant that I was lucky to receive lots of practice being friendly and outgoing with people who often did not look like me. I was optimistic about my prospects in Seattle though and reached out to many individuals in the arts community to establish a connection. One of those people was photographer, Daniel Carrillo, whose portrait of me is now part of Sir Elton John’s collection!

Well, two years went by and I felt like I wasn’t making enough progress. Admittedly, I had begun a project in my hometown of Vancouver, BC and had spent the bulk of my time driving back and forth with my little family in tow, hosting events that began at midnight and concluded at dawn. But when I was at home in Seattle, I also felt like maybe I was being overlooked as a valid artist because I was new to town and black. I reached out to a person I had friends in common with, a fellow organizer, to help me with my idea to create a local network for people of color. With our powers and offerings combined, the two of us were able to bring many people together, both IRL and virtually.

In October 2011, the Seattle People of Color Salon began holding regular gatherings. Today the group is most active as a closed group on Facebook, designed to compliment and expand the physical POC-only space. Recently, current events in Seattle have touched on why safe spaces like SPoCS are really important as inclusive, rather than exclusive places for those who have not historically had the benefit of a network.

At the first several SPoCS events, I had a house to play hostess with and although my son was still breastfeeding, I was a centrally-located in Beacon Hill. I started inviting strangers over to my house via Facebook, email, and text message, once a month for salon-style meet-ups. For two years, each month, I’d set aside a few hundred dollars to buy food, snacks, a case of wine, and perhaps other social lubricants to foster an atmosphere of safety, openness, and camaraderie.

Delightfully, my hard work paid off when my current job came to me via coffee with a new member of the community who had just returned from living in Atlanta and had heard of this new thing making Seattle less “freezy” for newbies—SPoCS. 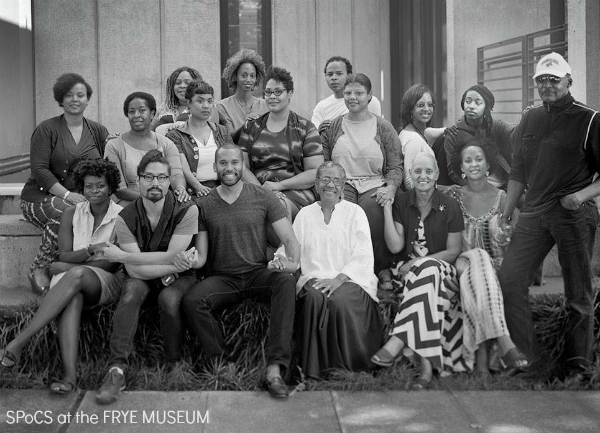 Four years later, SPoCS’ Facebook presence is incredibly strong—everyday people request membership, add their friends, share job opportunities, applicable articles, relevant issues, ask questions (i.e. where can I get my hair done, find an arborist, dentist, daycare?), make connections, and secure their hearts with a strong feeling of togetherness that really makes SPoCS work as both a network and a community.