It was a cute bit of theatrics when Colorado Gov. John Hickenlooper told a group of water managers last March that he, in fact, had swigged fracking fluid with the CEO of Halliburton. For those who don’t know, fracking is a drilling technique in which water, sand and chemical additives are pumped into oil and gas wells under high pressure in order to break open fuel-bearing formations.

The governor, whose state is in the midst of an oil and gas boom where almost every well is fracked, brought up the happy hour anecdote as a way to neutralize growing concerns by water managers about the risks that fracking poses to aquifers and drinking water supplies.

And it worked. The water managers all chuckled. Hick, as he’s sometimes called, had tapped into the power of humor to defuse a serious matter and tough questions..

It’s a technique worth noting and one that can be especially powerful in the tight semantic confines of social media such as Twitter, which is almost custom-made to capitalize on the power of the zinger. So when the governor, a former petroleum geologist, pulled the same Halliburtini story out of his hip pocket in Congressional testimony last week before the Senate Committee on Energy and Natural Resources, it seemed a like response might be in order.

Plus it was a Friday, and so we, too, decided to have some fun. It was time for a #fracktail. In short order, we came up with: 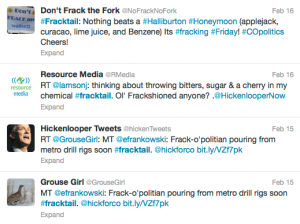 With a little outreach to groups and clients we work with and to Twitter handles focused on #fracking, the ball was rolling. As of today, the fracktail hashtag had received 250 Twitter mentions from 149 users, including retweets by the brewery that the governor founded and once owned and a handful of Colorado journalists.

The knee-jerk reaction to Hickenlooper’s light-hearted treatment of the subject could have been to trot out the “facts” in rebuttal – stories of water that burns, air tainted with the stench of petroleum and kids who develop a host of health problems after breathing it in while playing in their backyards. Fracking is, after all, a serious matter. A number of the chemicals used in fracking are known carcinogens. Drillers have pumped diesel fuel and benzene into wells.  And contrary to industry myth-making, there have been fracking accidents (see Dish, Texas, Pavilion, Wyo., and Dimock, Pa.), and when they happen, water supplies are wrecked, lives and communities destroyed, and people hurt.

But as we know intuitively and as academics are starting to find through research, social media humor “is closely associated with sharing opinion and … engaging in interpersonal discussion.”

Or in other words, telling good stories.

The power of humor was on full display throughout the 2012 election. And far from distracting voters from the seriousness of “real” issues, as Liz Breese points out in her blog, “jokes, wordplay, and humorous memes support and enable substantive political conversation on social media.”

In one social media evaluation related to campaigning last year, for example, ForSight analysis found that jokes and humorous posts comprised more than a third of the online conversations. Many of the posts on Twitter and Facebook were “humorous treatments” of the criticism of the Romneys’ out-of-touch lifestyle.

“Stating straightforwardly that the Romneys are economically privileged gets boring, and treating the subject of wealth can be uncomfortable, yet humor and social media give these opinions and criticisms space to be aired and shared.”

Fracking, emissions from coal-burning plants, clear-cutting, water contamination. These are all serious issues which deserve to see the light of day and to be debated vigorously. Humor, as evidenced by the long history of the political cartoon, has always been one way to make that happen. Increasingly, though, the power of social media is letting the world in on the joke … and thus the debate.

So, sit back, stir up a mudslide (Kahlua and Bailey’s Irish Cream over ice, served from a leaky earthen dam) and join the conversation.

Ready to power up your advocacy a notch or two? Let’s talk.