Burning Up Our Food Supply

With drought ravaging America’s Corn Belt, and food prices rising, every bushel of corn is precious. Yet according to the U.S. Department of Agriculture (USDA) nearly 40 percent of this year’s corn harvest will likely be used to make ethanol.

Many experts argue that diverting so much of the corn crop for ethanol—5 billion bushels or 248 billion pounds in 2012—contributes to food shortages and price volatility and around the world.

But just how many people could that corn feed?

We crunched the numbers based on the best available research.  Here’s what we learned: 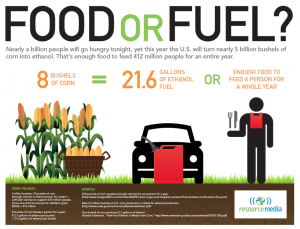 While weather is beyond our control, we can control what we do with the corn. Government incentives for corn ethanol mean that a lot of our most productive farmland is being used to grow crops for fuel instead of food. And that’s a problem we’re working on both through policy and public education.

The infographic reached 400,000 people via Twitter, thanks to tweets by influencers like Marion Nestle, Climate Progress and OxFam. It also spurred some thoughtful blog coverage on ThinkProgress, Huffington Post, Daily Meal and the Sierra Activist.