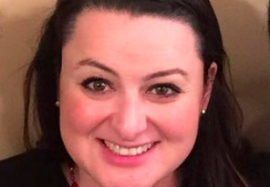 The ocean! From commercial fishing and aquaculture to conservation, if it’s blue, Marce has worked on it. She also worked in fields as varied as tech (mobile gaming and communications startups) and finance (insurance and brokerage), but they were all stepping stones and learning experiences that allowed her to leap into starting Azul. Currently, Marce would say her strength lies in community and coalition building, strategy and communications, environmental justice and advocacy.

To summarize, Marce could say that she used to sell fish, and now she saves them – but this also no longer feels entirely adequate. Yes, she is in conservation, and did get her start after coming face to face with overfishing in the private sector, but as she works more in ocean conservation – it’s gente / people that are at the center of it all. Conserving special places and biodiversity is definitely important, but conserving them without the support/collaboration of people limits the possible outcomes.

From helping create hope spots in California, to banning shark finning and now plastic bags, people power has been at the center of, and the force behind making these victories possible. The Verde Paper is not a culmination, but an expression of this – having colleagues trust us with their stories and wisdom to shape the paper was a reflection of our years of work together. Actually creating the paper with RM colleagues (Nicole, John, Scott) was a learning experience onto itself. Feedback from Congressman (and Ranking Member of the House Committee on Natural Resources) Raul Grijalva – who called the Verde Paper “a blueprint for equity in the environmental paper” was definitely thrilling and hearing that many conservation groups are making use of the paper – from mainstream players (Audubon, Center for Biological Diversity) bringing it in as a training resource, to EJ colleagues using it to support their efforts was definitely the highlight worth noting!