Traditionally, stories are (hopefully, gripping) text with images to support the storyline. But, what if the story format was flipped to be largely made of images with text included to support the visual story, not vice versa?

In this two-part series, I am going to share with you just a few of the visual storytelling techniques we explored in Istanbul. Today, I am going to start by showing you examples of photo essays with one or two images. Tomorrow I will dissect a photo essay in the classic form which includes six key elements.

Effective visual stories can be one or two images that “tell it all.” To be truly effective and memorable, they should have a supporting caption of one to three sentences that describes what you see in the picture and provides the context needed to fully understand the story.

Women’s World Banking, a nonprofit microfinance organization that gives small loans to low-income women to start their own businesses, does this very well.

They successfully use portraits of the people they serve to show the effect of their work. Notice that they don’t show people living in abject poverty – the “before” picture – to pull on your heartstrings to tell you how much they need your money. Instead, they show the “after” picture of the results of what will happen if you invest in their work. They have found that more effective in getting people to believe that if they invest in this organization, they will achieve good results. 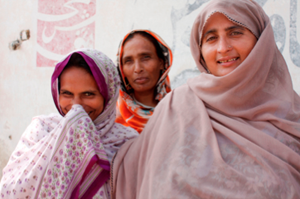 Notice the emotion is positive, of pride, success, satisfaction, happiness in this and other portraits. They show the joy of women who are financially independent and succeeding with the microloan and at the same time they show women with their dignity intact at their very best.

Oftentimes you really only need one image plus text to tell a story and portraits do the trick beautifully.

Surprise is another effective way to – in a single instant in a single image – capture people’s attention and tell a story. Surprise can be especially valuable as a fresh approach to an old story especially in cases where your audience has tired of, or turned away from, traditional images of suffering. 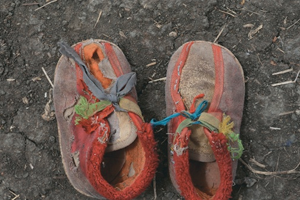 Surprise can take the form of an unusual symbol for an issue. The Long Walk documentary photography project by Shannon Jensen and sponsored by the Open Society Foundation’s Moving Walls project is an example of this. Through simple images of worn shoes and flip flops (and captions, of course) Jensen tells the story of the endurance and suffering of tens and thousands of civilians fleeing the conflict in South Sudan. 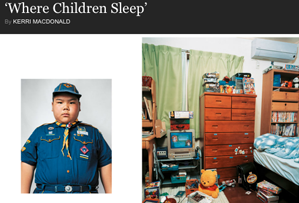 The Where Children Sleep is one of my favorites this year. Through image pairings it makes powerful comparisons in the lives of children in developing versus developed countries. James Mollison has proceeded show us, rather than just tell us about child poverty. All he does is take one dignified portrait of each child, followed by a photo of their bedroom. The shocker is in where they sleep – which says everything.

You don’t have to say much to make your point sometimes.